A lot of Unity 3D tutorials online use Unity’s linear interpolation incorrectly, including the official video tutorials(!). However, it’s actually very easy to use, once you understand how it works.

What it does is simple: it returns a point between start and finish, based on the value of percentage: 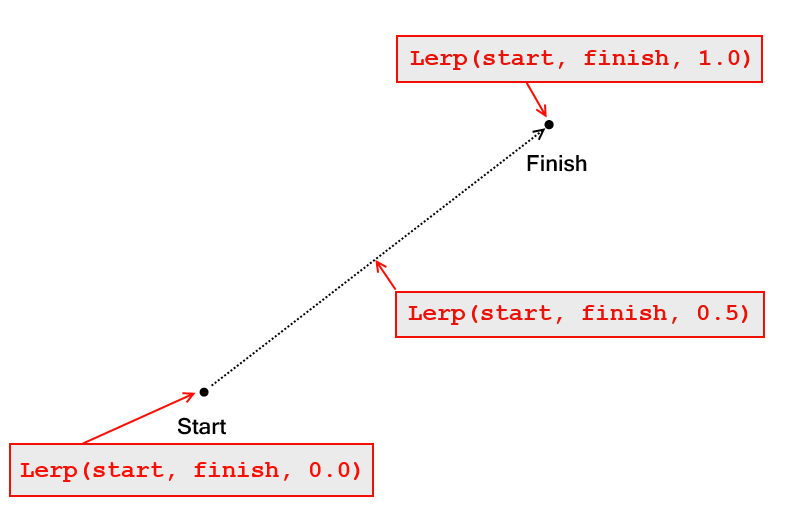 This explains why it’s called linear interpolation: It moves smoothly (interpolates) at a constant speed (linearly) between two points!

How to use Lerp correctly

To use Lerp() correctly, you simply have to make sure that you pass the same start and finish values every frame while moving percentage up from 0.0 to 1.0 each frame.

Here’s an example. When the spacebar is pressed, we’ll lerp our object 10 spaces forward over a period of 1 second.

How to use Lerp incorrectly

In our above example, we call Vector3.Lerp() like this:

However, the method for calling Lerp you see in many tutorials online looks like this:

Before I explain what’s wrong with this, please take a moment and try to figure out for yourself what this code will do, and why it’s wrong

The issue with the above code is that the first parameter to Lerp(), transform.position, changes every frame! Additionally, the percentage parameter (the third parameter) does not increase from 0.0 to 1.0, but instead is set to the completely arbitrary value speed*Time.deltaTime.

What this code actually does is move the object speed*Time.deltaTime-percent closer to _endPosition every frame.

There are several problems with this.

The implementation of Lerp

As a final note, I’d like to share how Lerp() is typically implemented. This section is not required, but mathematically-inclined readers will find it interesting.

(Edit Oct 2016: A commenter correctly pointed out that this implementation of Lerp() has floating-point rounding issues. See his comment for a more accurate version)